Prayagraj was earlier known as Allahabad. It is a metropolis, within the Indian state of Uttar Pradesh.

Prayagraj stands on the site of ancient Prayag. A holy city that was similar in fame to Varanasi and Haridwar.

Prayagraj has long been primarily, an administrative and academic center.

It’s a modest industrial base. Perhaps a marketplace for agricultural products.

Tourism has grown within the region. Tourists visit historic and non-secular sites, located within and near the town.

In 2018, the govt. of Uttar Pradesh decided to change the name of the town from Allahabad to Prayagraj.

The encompassing area lies entirely on the Indo-Gangetic Plain. The chief crops of the region are rice, barley, wheat, and gram (chickpeas).

A city of many dimensions is what befits the outline of Prayagraj.

Additionally, to be a significant pilgrimage center, the town has played an important part in the formation of recent India.

Allahabad fort was built in the 16th century. In its premises, stands an enormous Ashoka Pillar, that belongs to that Mauryan Era. The pillar is made of polished sandstone. It is approximately 10.6 meters high and can be dated back to the 3rd Century B.C. The pillar bears various inscriptions which include inscriptions by Ashok, Samudragupta, and Jahangir. It’s believed, that this pillar was initially formed at Kaushambi and later moved to Allahabad.

The fort stands on the banks of the river Yamuna, near the meeting point. In its prime, the fort was incomparable for its design, construction, and craftsmanship. This huge majestic fort has three magnificent galleries bounded by high towers. The magnificent outer wall is unbroken and rises above the water’s edge.

The ‘great’ Kumbh Mela is the largest religious fair in India. Millions of devouts visit Kumbh Mela. According to legends, Lord Vishnu was carrying a pot of nectar, and a scuffle broke out, for the nectar. Because of the scuffle, 4 drops of the nectar spilled on the Earth. Tirthas are those places where the nectar droplets fell. These Tirthas are Prayag, Haridwar, Nasik, and Ujjain. The Kumbh Mela, takes place every three years, at each tirtha, in turns. In Prayagraj, Kumbh takes place once every twelve years. The Kumbh Mela is the largest and most sacred of all.

The sacred Sangam is the confluence of three of the holiest rivers in Hindu mythology. I.e. Ganga, Yamuna, and Saraswati. The water from the Ganges and the Yamuna merges at the Sangam. It’s during the Kumbh/Ardh Kumbh when the Sangam truly comes alive. Kumbh attracts the most important gathering, within the planet of the devout, from all across the country and the whole world.

We hope that you liked this blog and found it helpful to know more about the historical place Prayagraj. Stay tuned with Blogger Bunny for such more interesting blogs. Meanwhile, visit our blog – Indian City Varanasi: The Ancient Gold. 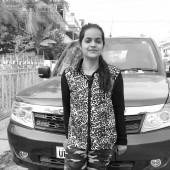 Hello! I'm Saumya Tripathi currently pursuing graduation final year (B.com) from University of Allahabad . Apart from being an avid reader, I pen down my opinion in from of articles and blogs . Working with blogger bunny has been a great experience so far , looking forward to exploring more with the team & learning relevant skills that would be enhanced my potential , deliberation and thought process. I hope my passion towards content writing turns out to be successful and people appreciate my write-ups.

Development: A way of destructing environment

Why Is Self-Defence Important?